Boo!  It can be a scary world out there, as Philosophy Professor Alison Reiheld reminds us in this post…

As October begins, we notice the signs of autumnal rituals: pumpkins both real and false, wreaths in rich browns and oranges and yellows and reds, and of course gargantuan bags of candy and fantastical costumes aimed at both children and adults.  Many of these costumes portray exaggerated versions of real-life roles, and those for women are often quite sexy.  One need only Google “nurse costume” to see that the prevailing notion of this is not professional aspiration, but a version of “nurse”—in both dress and behavior/pose—directed at the male gaze, even for costumes targeted at pre-pubescent girls. 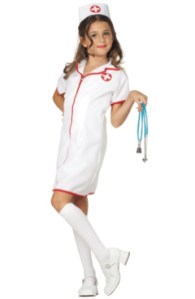 Every Halloween—and at a distressing number of points in between—I think of philosopher Marilyn Frye’s excellent article “Sexism” from her influential book The Politics of Reality. Frye notes that whether or not we use differentiation between the sexes to perpetuate sexism, sexism requires being able to differentiate between the sexes.  Frye calls the action of constantly identifying which sex a person belongs to “sex-marking” and notes that it is pervasive in language and social interactions:

In sexist cultural/economic systems, sex is always relevant… Sex-identification intrudes into every moment of our lives and discourse, no matter what the supposedly primary focus or topic of the moment is.  Elaborate, systematic, ubiquitous, and redundant marking of a distinction between two sexes of humans and most animals is customary and obligatory.  One never can ignore it.

Examples of sex-marking behavior patterns abound. A couple enters a restaurant; the headwaiter or hostess addresses the man and does not address the woman.  The physician addresses the man by surname and honorific… and addresses the woman by given name… You congratulate your friend—a hug, a slap on the back, shaking hands, kissing; one of the things which determines which of these you do is your friend’s sex.  In everything one does one has two complete repertoires of behavior, one for interactions with women and one for interactions with men. Greeting, storytelling, ordergiving and order-receiving, negotiating, gesturing deference or dominance, encouraging, challenging, asking for information: one does all of these things differently depending on whether the relevant others are male or female.

I find it fascinating, and at times depressing, that sex-marking is still so important.  Frye’s The Politics of Reality came out in 1983.  We stand now precisely 3 decades later.  The behavior of headwaiters or physicians may have changed, but a great deal of our social rituals do indeed still differ depending on the gender of one’s interlocutor.

But what does this have to do with Halloween costumes?  The costumes commercially available in most stores are heavily sex-marked.  There are relatively few costumes that could be worn by either a boy or a girl (or a man or a woman).  These images were taken at the local Target store in Edwardsville, IL, in 2013 as the Halloween season gears up just before October begins. They show both sides of the “Girls” costume aisle.

Particularly deserving of further reflection is why there are two Supergirl costumes.  You can see the red and blue one down at the bottom.  Never mind that female Superheroes are expected to fight in revealing clothing (there have been some excellent critiques of this, and attempts to redesign costumes, within online Comic fandom).  That was not feminine enough.  Note top row, left, the extremely pink Supergirl costume (from DC Comics).  Right next to it, you see an extremely pink Spidergirl costume (a separate company, Marvel Comics).  Below are closeups of each, along with depictions of the relevant female heroes from the comic books.  Note in particular the way that the pink Spidergirl is posed on the costume label, with breasts and hips thrust out in a contortion both uncomfortable and all too common in depictions of female heroes. Note also that the Supergirl costume comes with fingernail decorations and the girl wearing the costume in the advertising is delicately holding her fingernails up to show them off.  What fantasies are being made available to the girls who choose these costumes over the more traditional ones actually worn in the comics?  What fantasies are being made available to the girls who choose even the traditional ones?  I take some consolation in the fact that there are fewer traditional Supergirl costumes left on the rack than the empinkened ones. 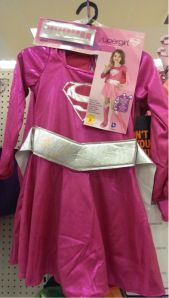 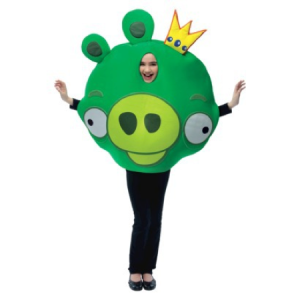 What frustrates me most about this state of affairs IS NOT that there are princess costumes and feminine frillery available for girls to play dress-up.  It IS that princess costumes and feminine frillery are primarily the options available. The range of opportunities for dress-up available to both girls and boys is hemmed in on all sides by gender norms and by the desperate need to be able, at all times and in all places, to sex-mark other persons.  I AM troubled by the fact that such sex-marking so often involves not only sex-specific markers such as skirts, but also displaying secondary sex characteristics which do not even yet exist by putting fake muscles on little boys’ superhero costumes and having girls pose in positions similar to those which adult women use to display their breasts and hips and butts.  The necessity of sex-marking is no less the case with children who come to one’s door for Halloween, who are strangers and whose sex is thus unknown unless clearly marked, than it is for adults.

However, it’s not all bad news.  There are venues which provide a much broader range of costumes for young girls and teens.  One of these is A Mighty Girl.  This website provides book, toy, and activity recommendations for girls who want to be girls within a range of expressions thereof, some of which can violate gender norms rather significantly and others of which simply challenge the clarity of sex-marking.    At this time of year, they also provide Halloween costumes which range from community service personnel such as police officers or fire fighters (all depicted with both boy and girl models as opposed to the usual boy models), superheroes both traditionally male and female (they have all of the Incredibles, including Violet and Mrs. Incredible), armored female warriors such as Lady Sif from Marvel’s Thor and Snow White from the recent film, and gender-neutral (or at least not overly feminized) costumes such as aviator, doctor, construction-worker, and so on. 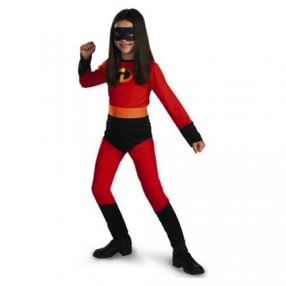 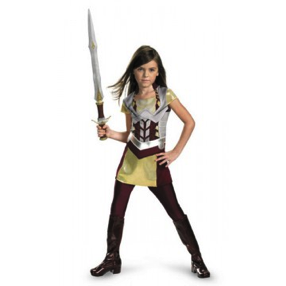 Yes, there are frilly princesses.  And there are cowgirls, but not the pink and white cow pattern skirt and vest and pink hat one finds in the cowgirl costume at target.  A WIDE RANGE OF OPTIONS for girls are available.  It is the restriction of options for how to be a girl or a boy that I find most distressing about the way that “Girl” and “Boy” costume aisles are set up in stores.

We need to sex-mark, and get socially confused when we cannot.  As Frye puts it, our utterances and interactions become unintelligible because “Sex-marking is not optional; it is as obligatory as it is pervasive.”  And it is easiest to sex mark when we separate girls and boys so widely that there is no possibility for confusion.  Frye contends that “The pressure on each of us to guess or determine the sex of everybody else both generates and is exhibited in a great pressure on each of us to inform everybody all the time of our sex.”  This, however, dramatically limits the dreams and fantasies of boys and girls, especially at Halloween which is precisely a time for liminality, for occupying the space between fantasy and reality.  The candy is nice, but it’s the costumes that kids start planning months ahead of time.

View all posts by siuewmst